The bandoneón
I play

In the summer of 2017 I bought this bandoneon after nearly two years of savings. Anyway it was less expensive than a bandoneon 142 Alfred Arnold or a Premier, because it is a 144 Einheits, not a common choice for bandoneon, but for me it was the ideal instrument as from the beginning I decided that I would have played this keyboards layout. In the final price restoration and tuning were also included.

This instrument has accompanied me so far: it's the instrument I used for my exams at Buenos Aires's Conservatory and on which I study every day.

The bandoneon was built by Paul Burkhardt probably in 1925 or 1928 (or during the early '30s). I have never seen other instruments under this brand: probably Burkhardt was one of the several bandoneon and concertina builders active in Saxony during those years.

The stamp says Olbernhau i. Sa., actually a town near Czech Republic, not far from Chemnitz or Carlsfeld; the wording i. Sa. just means "in Saxony".

It's a very rare bandoneon 144 Einheits, octave tuning, with zinc plates. This feature may be due to the fact that the instrument is quite old (prior to the introduction of aluminum in bandoneons) or was a specific, custom model for playing tango. As matter of fact, the instrument has a sound almost identical to the commonly considered bandoneons for tango.

This cassotto inlay is not common in bandoneons. Probably the customer asked for more sound power at the bass notes. The inlays were closed with a wooden panel by the restorer. Another interesting feauter is the front valve, not in the common rear position; this is quite common in the older instruments. 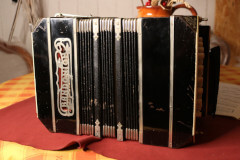 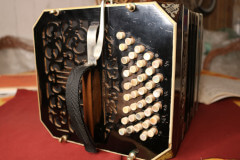 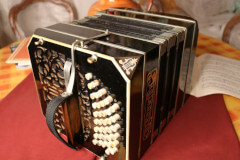 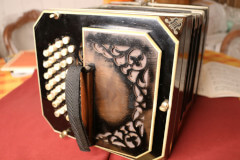 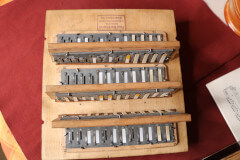 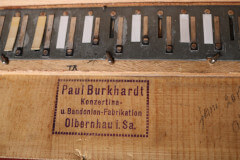 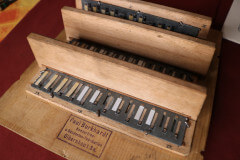 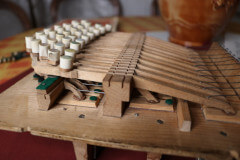 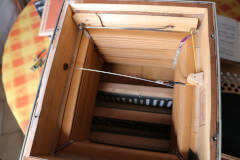 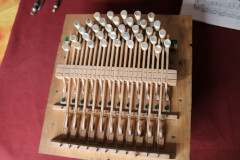 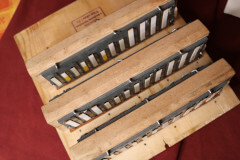 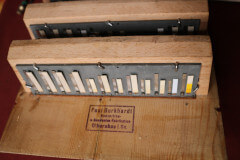 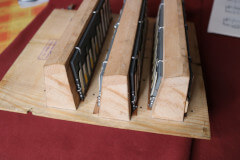 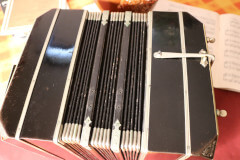 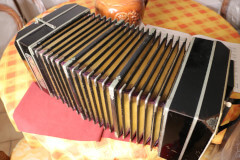 by supporting me on Patreon

Choose your tier, take part in the creative process and receive bonus and exclusive content and benefits. Have a look.